The story about For Defense resistance

Fusarium resistance: from sleepless nights to peace of mind 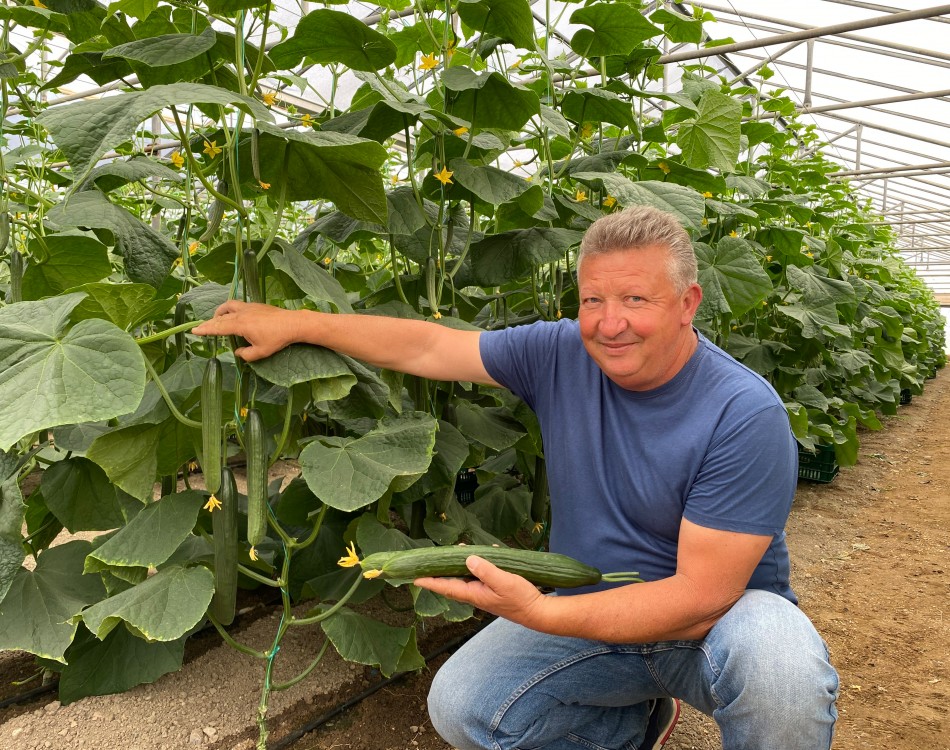 Two years ago, Rijk Zwaan became the first vegetable breeding company to introduce Fusarium-resistant cucumber varieties. Fusarium causes a lot of problems and is a serious threat to cucumber growers. Last season, Greek cucumber grower Marinos Epitropakis used the For Defense variety Forada RZ: “This variety now enables me to harvest high-quality fruits in a region where growing non-grafted cultivation is a risk.” In this article, Marinos Epitropakis explains more about Fusarium infection, shares his initial experiences with the For Defense variety Forada RZ and discusses the benefits compared with conventional varieties.

Fusarium is a major threat

Fusarium can be a serious problem in cucumber cultivation. The fungal disease can cause a lot of damage, especially when cucumbers are grown in soil in non-heated, medium-tech greenhouses. “Fusarium is a very big threat in the Psari Forada region of Crete, Greece,” says Marinos Epitropakis. “Once the plants are infected, there is no treatment that allows them to recover. Initially, the plants start to wilt, and the disease eventually spreads throughout the entire crop and inevitably results in extensive damage and loss of production. To avoid this, in the past we were forced to cultivate grafted plants, which is very costly.” Fusarium mainly occurs in autumn and winter, which are the two main production seasons in Southern Europe. Rijk Zwaan’s Fusarium-resistant varieties – Forami RZ and Forada RZ – are very suitable for cultivation in Spain and Greece, respectively.

Carefree cultivation with For Defense

For Defense varieties have good resistance against Fusarium oxysporum f. sp. Cucumerinum. “These varieties enable us to cultivate non-grafted plants, resulting in a lower purchase price compared to grafted ones. Besides that, I’m not constantly stressed about the damage that can be caused by this fungus anymore” he continues. “The main difference between Forada RZ and a conventional variety is the resistance. It means that I no longer need to use chemical or organic crop protection agents to prevent Fusarium from spreading in the greenhouse. In the past, such products increased the costs, even though the results were unpredictable.”

Marinos Epitropakis explains that he had a very simple reason for choosing a For Defense variety: “Cucumber is a very important crop for export. Thanks to the For Defense varieties, I’m able to purchase the plants at a good price, plus I don’t have so much stress anymore during the cultivation process. Forada RZ delivers very high-quality produce and also enables me to use less or even zero chemical crop protection. This offers the added advantage that there is no residue left on the fruits, leading to healthier products for consumers.”

First-hand experience with For Defense varieties

According to Marinos Epitropakis, his initial experiences with a For Defense variety have been nothing but positive. “Forada RZ enables me to harvest high-quality fruits in a region where non-grafted cultivation is an enormous risk. Besides that, the crop stays healthy during the whole cycle, allowing me to produce in the winter too. Beforehand, I expected Forada RZ to be resistant against Fusarium and that it would reduce the number of infections compared with the conventional variety, even under difficult conditions. After one year of growing Forada RZ, I can definitely confirm that it has lived up to my expectations!”